From the December Issue of New City Life Magazine

“No one who cooks, cooks alone. Even at her most solitary, a cook in the kitchen is surrounded by generations of cooks past.” Laurie Colwin

Dana Reyes stands in the kitchen of Gary and Company skillfully preparing an age old recipe handed down to her from her Philipino Mother-in-Law Fely. She is a serious baker whose head is swimming with filling ideas and whose hands are filled with sugar and butter. Reyes was born in New York, grew up in South Florida and summered in Rockland with family.

Reyes always dreamed of owning her own business. She learned to bake early on from her grandmother Martha and perfected her Mother-In-Law Fely’s intricate and personal recipe for ensaimadas. Fely visited the shop in Congers on Lake Road, when Dana and Roger Reyes first opened and beamed with pride over what the Reyes’ accomplished. Not only did Dana Reyes spend years making sure the recipe held up to her Mother-in-Law’s standards but Roger Reyes built the cabinetry, hung all the fixtures and the two, as a tag team, cozied up their quaint store to offer an attractive and inviting haven to those wanting to take a little bite into history.

Fely, who loved to do nothing more than cook and ballroom dance, was famous for her parties where guests swarmed around her and her delicious food. The ensaimada recipe was sacred in her house and she never shared it until Dana asked if she might share it with her. Martha, short in stature with gray hair and a hearty laugh, made up what she lacked in height with Chutzpah. “She had the biggest heart, she couldn’t say no to anyone,” explained Reyes. “She was a huge part of my life until I was 22 when she died, I miss her every day.

Gary Oteri stands not far in the distance at Gary and Company discussing a catering order in his Café that has served the community since January 2000. Oteri has been in the food business most of his life and purchased his business from Helen and Company. His Dad was a wholesale butcher in Yonkers, NY. Gary and Company was originally located on the corner of First Street and Maple Avenue in New City. In July, 2006, Oteri moved to a much larger location at 49 So. Main Street. He expanded his business to allow for sit-down customers to enjoy an array of freshly made salads, gourmet wraps, sandwiches, soups and hot Panini’s. He also added a wine and beer selection to his menu and his company offers full service catering and event planning.

Reyes and her husband owned Just Buns in Congers for almost four years. As a small business they worked hard and tried to make ends meet. Rent was high so they painfully decided to leave Congers and move to New City to start again. A local friend introduced the Reyes to Oteri. The two business people thought that having a baker inside the Café was a perfect match. Just Buns of New City officially opened in the beginning of September, 2013. Customers from Just Buns previous Congers location come to New City to wish them well, say hello and order trays of buns to bring to parties or ship to their children in college. The buns that Reyes creates, and that she calls “Swirly Buns” are light and flaky some might say like a cross between a croissant and an empanada.

Reyes’ mother-in-law Fely, a Batangas native, lived next to a bakery in the Philippines and learned to make ensaimadas for her family. Hers were filled with ham and cheese and sprinkled with sugar. She created her own special recipe from years of learning and watching the traditional versions of this light, delicious treat. Roger Reyes remembers fondly devouring these delicate buns as a snack with hot chocolate or tea while growing up in Texas. However, because the yeast had to rise the buns were only made in summer when South Texas temperatures hovered around 100 degrees with high humidity—this is what gives the buns their light, airy texture.

Dana Reyes rolls each and every bun by hand, carefully placing the appropriate filling and choosing only the freshest and highest-quality ingredients including Cabot butter and Callebaut chocolate. There are no preservatives here. “There is a meditative place you go to when you bake,” Reyes explains, “it is very zenlike—this is not place for anything but fresh ingredients! I left a corporate career to bake and I hope to continue for a very long time, I love what I do.”

Ensaimadas come from the Spanish region of Majorca. This Spanish pastry was first cited in literature in the 17th century. Ensaimadas are traditionally made with pork lard, and served cold with powdered sugar and hot chocolate. The Philippines, once a Spanish colony is where the pastry evolved and changed and pork fat gave way to other ingredients. The pastry became more of a brioche made with butter instead of the traditional lard. The word for pork lard is ‘saïm’ hence the name ‘ensaimada’. 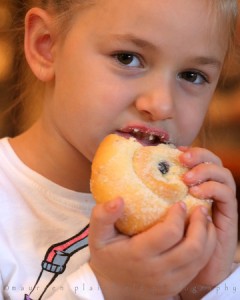 Just Buns has received positive reviews from numerous food blogs including Food 411, Daily Candy, The Nibble and Bite of the Best. A sampling of their swirly buns earned them two spots on ABC Eyewitness News Secret Sales with Tory Johnson and the Elvis Duran Show on Z100 Radio. It remains a mystery to Reyes how Tory Johnson heard about her. “Two customers tipped off Tory Johnson and to this day I don’t know which customers they are!” said Reyes. Another customer took her own time to write to Oprah the first year Just Buns was open in Congers. “I couldn’t believe it, “explained Reyes, “we didn’t end up on the show, but just the thought that my customer went out of her way to help us is unbelievable!”

Just Buns definitely knows the meaning of community and donates generously to local charities including Relay for Life; People to People; Nyack Homeless Project; and has taken part in the Taste of Rockland for several years. She has also been very involved in Hi Tor Animal Care Center fundraisers, an organization that is near and dear to her heart. Reyes is looking to include wholesale to her business plan and mission and customers tell her as an entrepreneur, she should audition a pitch to ABC’s Shark Tank.

Life is complex and hurried. Take a few minutes to experience a small treat steeped in family history and handed down to a new generation. Reyes is happy to place one more bun in the oven carefully aware that her Grandmother is watching over her butter laden hands and that her Mother-In-Law witnessed how hard she has worked to achieve her goals. 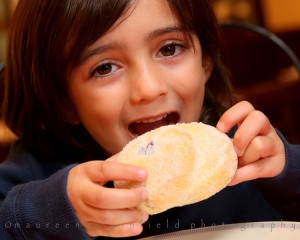 “One of the very nicest things about life is the way we must regularly stop whatever it is we are doing and devote our attention to eating.” — Luciano Pavarotti and William Wright, from Pavarotti, My Own Story 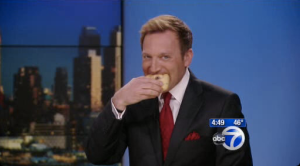 Swirly buns are perfect for birthday parties, baby showers, weddings, bridal showers or cocktail parties, or office luncheons. Gary and Company Café where Just Buns is located is at 49 South Main Street in New City. Stop by for a swirly bun, sweet or savory, and a cup of hot coffee. $2.55 each bun or $14.50 for half dozen $25 for a dozen. Mini buns are $18 per dozen. Reyes also has Holiday samples in the store for tastings. Website at http://www.justbunsbakery.com/. 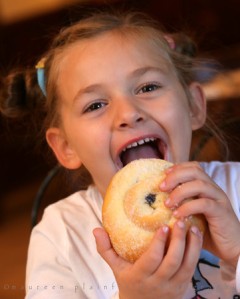 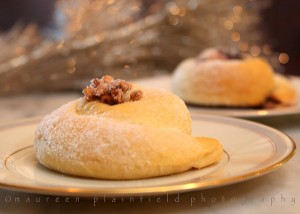