Put the dates on your calendar. You will not be disappointed.

If you participated in “Walk to The Beat” this summer in Nyack, you will not want to miss ArtsRock’s Walk to the Beat, Jr. Some acts are still being confirmed but you can expect steel drums, a Brazilian sound and a very celtic/Spanish influence among other percussive music and dance performances. Heather Cornell and Anna de la Paz of Nyack, and both International performing touring artists, will bring the spirit of the original festival inside the Nyack Center. After the show, the room will turn into an interactive space with demonstrations, lessons and opportunities for young and old to try out the energy they just experienced. This event is appropriate for all ages 1-100. Saturday, November 29, 2014 at 2:00pm.

On December 29th a hula-hopping fiddler, dancing monkey and the Bossy Frog will entertain and enlighten with a musical extravaganza. Immediately following the show, the concert hall will turn into a musical instrument petting zoo where children can try out all kinds of instruments. The Bossy Frog Band’s happy new year concert is at 11:00am at The Nyack Center. And don’t forget that milk and cookies will be served.

For the young and young at heart, award-winning puppeteer Bonnie Duncan along with three local puppeteers will perform a one hour puppet show followed by a “Pop Up Puppet Making Workshop”. Sunday, January 18th, 2015 at 2:00pm. 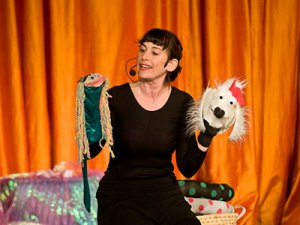 Saturday, January 24th at The Nyack Center at 6:00pm. Bodypainting from 6pm-7:45pm.  Conversation starts at 8pm. World-renowned artist and Nyack resident Andy Golub asks us to rethink what is art and what is a canvas. His NYC Bodypainting Day in July of 2014 received worldwide attention, and challenged social norms by selecting models, both male and female of all shapes and sizes. Mr. Golub joins award-winning broadcaster Elliott Forrest in conversation about his life, career and inspirations. The evening will feature images of Mr. Golub’s work and live, full nude bodypainted models. 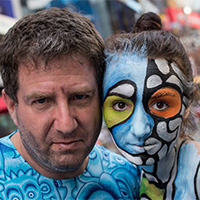 Saturday, March 14th 2015 at First Reformed Church of Nyack at 2:00pm, children’s favorite performer Tom Chapin will be celebrating his birthday in his home county of Rockland with songs that will touch and entertain kids of all ages.

Thursday, March 26th 2015 there will be a special ArtsRock benefit. The week after St. Patrick’s Day and with amazing Irish spirit Sir James Galway (who at 74 still wishes to be known as ‘a bit of a lad’) and Lady Jeanne Galway, world-renowned classical flautists, will be performing a benefit concert.

For more information, ticket pricing and to purchase tickets go to ArtsRock website at: http://www.artsrock.org