Barbra Streisand filled the October air and two gray, stuffed Schnauzers — in a plush dog bed — sat near the back door to the home. Mel Davis, at a towering 6’6′ wore slippers and quickly explained how Streisand and Schnauzers were two of his loves. “I love Barbra,” he said “all her music, all her movies, everything… and the Schnauzers…” he snickered, “I had two real dogs (referencing the stuffed puppies) back when I played for the Knicks — Candy and Baron — now can you please remove your shoes?”

The home was immaculate. Not a thing out of place. Every oak floor throughout gleamed with Brazilian, maple or mahogany custom etching. The kitchen boasted Viking appliances throughout with a custom tile floor and the multi tiered wood deck and spa, directly off the kitchen, ideal for hosting parties. Mel Davis, selected fourteenth overall by the New York Knicks in the 1973 NBA Draft, it would become clear, held his share of events at this home in Montebello. A delightful, classic home built purposely for entertaining, “Yes, we enjoyed entertaining a lot here,” Mel explained. “

Originally from Bedford-Stuyvesant Brooklyn, Mel wanted to be a veterinarian but St. John’s University, where he began his college career in 1970, did not offer a medical degree. Mel played for the Knicks with NBA stars such as Willis Reed, Clyde Frazier, Phil Jackson and Bill Bradley. He was ranked seventh on the St. John’s University all-time rebounding list after playing just two years on the team.
The 6’6” forward played in the NBA from 1973 to 1977 spending three successful seasons with the Knicks and one with the New York Nets. Mel went on to play five more seasons of basketball, overseas. He spent time in Italy, France and Switzerland before returning to the United States. 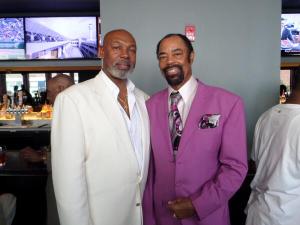 “When I played basketball in Italy,” Mel said, “my teammates would invite me to their homes for supper. The first time, I put ketchup on my spaghetti,” he smiled. “short of killing me they told me, mostly in Italian, that they would teach me to cook. And they certainly did!”

Thereafter, Mel purchased a cookbook in every town in Europe where he played ball and tried new recipes every week when he returned home. He cooks every chance he gets and admitted that his go-to meal is still meatballs and spaghetti but always with a homemade sauce. “In Italy,” he began “the refrigerators are small, you go to the market everyday and buy what is fresh, I loved that –what a healthy way to eat and a great way to enmesh yourself in the culture.” 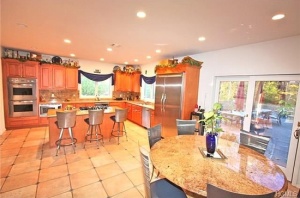 When Mel and his wife built this home the kitchen details were very important to them. “I have been living in Suffern for thirty-one years,” he said, “twelve years ago when we built here I walked every single lot and chose this particular one, we were the first house built besides the model.” Mel was at the construction site everyday going over every last detail with the builder. A friend of his wife’s told them about a builder in Greenwich where they got many of their custom detail ideas.

If you live in Rockland County and your child loved basketball then you might know Mel Davis from his camp that he ran for fifteen years at Rockland Community College. “Future Stars Basketball Camp” is a legacy. “I wanted to do one week each summer,” he explained, “but parents begged me to increase it to two weeks, some wanted three — some of them wanted me to turn their children into NBA stars!” Every week at the camp, Mel held a “Pro of the Week” day where names like Willis Reed and Walt Frazier would come by for a visit. “I feel like I have touched 90% of the families in Rockland,” he said.

Not only did Mel touch the lives of the camp kids, he is a huge advocate for Big Brothers/Big Sisters and The Boys Club (Police Athletic League). “The Boys Club kept me off the streets and kept me clean growing up and I will never forget them.” Mel remembered. He also spoke highly of Gillian E. Ballard, President and CEO of Big Brothers/Big Sisters of Rockland and is there for her whenever she calls.

Mel attributes his success to being very focused and driven, being in the right place at the right time and a little luck. “I have never met a more determined person,” said his wife Joan. Being a true Scorpio he is a fierce competitor and suited to any form of business that makes a difference in the world. While playing for the NBA and in Europe there was little time for much else besides playing ball. When Mel saw “The Bucket List” the movie with Jack Nickolsan and Morgan Freeman he knew this was a tremendous idea. His bucket list includes sailing, classic cars, dancing (especially the salsa, meringue and tango), fishing, and English style horseback riding.. The Davis’ love Harriman State Park and have been known to get their Latin on at the Westgate in Nyack.

Mel has three grown daughters and when he speaks of them his eyes light up and a little smile crosses his face. “I told them that one of them has to promise me to give birth to a Shaquille O’Neil!” he laughed.

The Davis’ love Sutters Mill and Dino’s Diner in Suffern and Mel rides at the Ramapo Equestrian Center just around the corner. “We recently tried O’Lar in Piermont as well, at the recommendation of our Realtor Noemi Morales-Barile, and the food was out of this world delicious.”

The home will be included in Coldwell Banker’s “Fall in Love With the American Dream” Tri-State Open House on October 19th.